March 8 is the 39th anniversary of National Ag Day organized by the Agriculture Council of America. It is celebrated so that everyone can appreciate the role agriculture plays in providing safe, abundant and affordable products.

According to the Virginia Department of Agriculture and Consumer Services, “Agriculture is Virginia’s largest industry by far, with nothing else coming a close second.  The industry has an economic impact of $55 billion annually and provides more than 357,000 jobs in the Commonwealth.”

Agriculture plays an essential role in maintaining a strong economy. The following are agricultural statistics compiled from website citydata.com, comparing agriculture in Amelia, Nottoway and Prince Edward Counties for year 2009:

The value of nursery, greenhouse, floriculture, and sod as a percentage of the total market value of agricultural products sold: Prince Edward 8.21% / Nottoway 0.85% / Amelia 0.13%

The value of livestock, poultry, and their products as a percentage of the total market value of agricultural products sold: Prince Edward 77.64% / Nottoway 90.92% / Amelia 93.46%

Irrigated harvested cropland as a percentage of land in farms: Prince Edward 3.24% / not listed / not listed

All wheat for grain:Prince Edward 268 harvested acres / Nottoway and Amelia – not listed

June 25: Partnering with ARKS for parks at Twin Lakes State Park to present the water cycle 9-11am 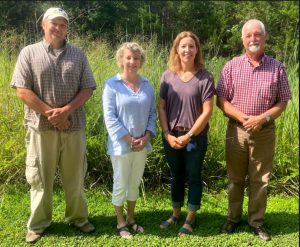